Our present Limited Stock is from 75 to 90 years old wood picture below: 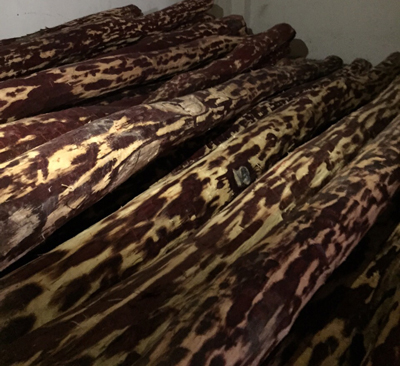 Mysore is a city in the Karnataka region where Sandalwood was distilled in the past. Some like to see the word Mysore, but as long as the Sandalwood is Santalum album from South India and distilled correctly from older trees, this is the best you can do. Each batch is slightly different. Due to the rarity of Sandalwood we should be happy to get any at all. For us to restock Sandalwood the price keeps increasing and we believe it will increase year on year.

AROMA: Rich, soft, smooth-woody-musky sweet and tenacious and a is an excellent quality Sandalwood.

Sandalwood is a base note which initially is not strong but develops once applied to the skin. Used as A fixative, it blends well with Essential oils of Frankincense, Roses, Holeaf, Lavender, Clove , Black pepper, Bergamot, Vetiver, Patchouli, Myrrh and Jasmin.

QUALITIES: often burnt as an aid to meditation. Creates an exotic atmosphere, excellent for skin care, especially when dry or sensitive, add to moisturiser for treating 'barbers rash'. Useful for dry or damaged hair and as a body fragrance it is appealing to both men and women, in India it is often combined with rose absolute to make the famous perfume aytar. It has long been used in India in traditional Ayurvedic medicine. Try adding to a carrier oil and massaging throat to relive laryngitis, dry coughs and sore throat. Antiseptic, soothing with aphrodisiac properties. Has an affiliation with the urinary tract and is helpful in treating any problems in this area.

Not to be confused with the cheaper West Indian (Amyris balsamifera) or now expensive Australian sandalwood (Santalum spicatum). Santalum album vs Santalum spicatum: one is not better or worse than the other, they are just different. Much of Aroma is based on personal taste.

A member of the Santalaceae family, it is a small many branched evergreen parasitic tree, up to eighteen metres in height. It has a brown-grey trunk with large leathery leaves and small purple flowers. Native to tropical Indo-Asia.

Nearly all Sandalwood offered for sale is now Australian Santalum spicatum, which is a different species all together. Santalum album variety is wild and grown in south India. There is increasing planting of (Santalum album) in Australia that was started in 1983. The oldest plantation will only be 32 years old from today in 2015.

"Historically Sandalwood trees less than 100cm in diameter and tree less than 60 years old were considered to be too young to harvest. Heartwood volume, oil % and oil quality were considered to be inferior. Officially it is illegal in India to harvest sandal trees at less than 30 years of age. Please note: Sandalwood could become an endangered species and is controlled and monitored by the Indian government. A great deal of people in India and the world depend on this oil and it would be a shame not to conserve it.